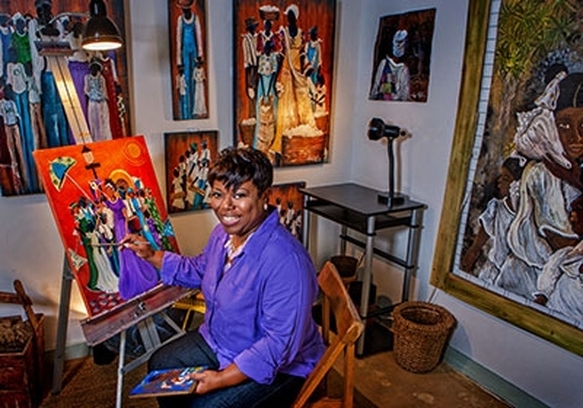 Sonja Griffin Evans is an international Cultural Gullah Artist born and raised in Beaufort, South Carolina. Growing up in the lowcountry, which prides itself on its ability to preserve its culture and heritage, has heavily influenced Sonja's artwork, and gives her an uncanny ability to capture the beauty, spirituality and purest representations of the Gullah Sea Islands and of African American culture. As a prolific mix media artist, she incorporates items such as tin, wood and other materials in her art.

She is also adept at painting the vibrantly colored art on canvas that is acknowledged as the traditional Gullah style; adding texture to create depth. In both mediums, Sonja is careful to express her culture in its purest form. Evans believes that everything that God has created is not only beautiful, but has a purpose and states nothing should be wasted. She further believes she merely holds the paint brush and God ultimately creates the art.

Sonja is known for her ability to see the beauty in found items and selects each item and unveils the alluring stories these pieces hold within them; reflecting the spirituality of the people of African descent. With her masterful use of color and perspective in her work, Griffin Evans' artwork is constantly evolving. Each piece has a story or inspirational quote that invokes spiritual and cultural insight.

Sonja Griffin Evans, the owner of the former Gumbo Gallery, located in Pensacola, Florida, has won many prestigious awards. In 2013 her gallery received the African Diaspora World Tourism Flame Keepers Award for honoring the culture and heritage of people of African Descent. Sonja has personally been named Honoree, Mamie Till Mobley Woman of Courage Award, and was an Onyx Award Nominee. As a highly sought after speaker and advocate for the arts, Evans has been featured on television and radio broadcasts, and in publications; such as DuPont Registry, Southern Lady Magazine, Upscale Magazine, Hilton Head Monthly, From Imagining to Understanding the African American Experience and more.

Her artwork is in prestigious galleries, private and corporate collections, nationally and abroad. Her artwork was recently selected by the National Park Service to represent the 2016 National Underground Railroad Conference and displays permanently commemorating historic Mitchelville at the Westin Hilton Head Spa and Resort.